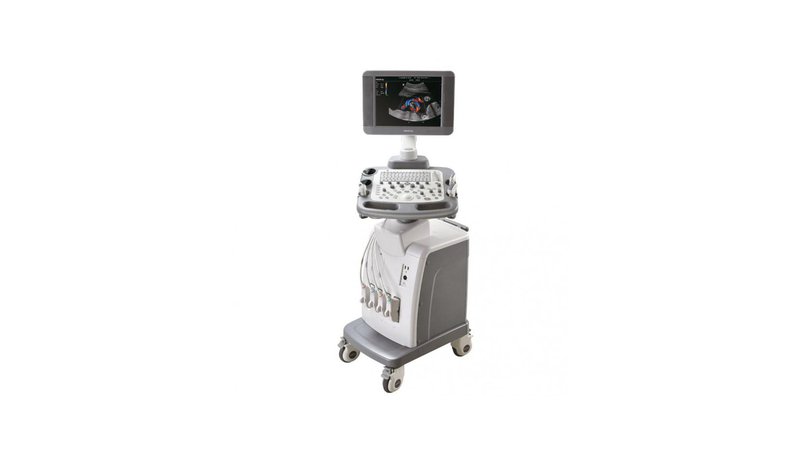 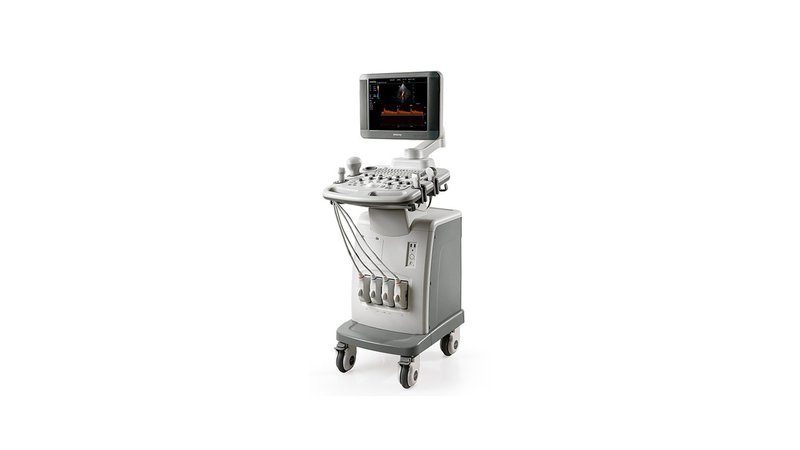 A next-level ultrasound scanner that delivers the highest image quality, performance, and a comprehensive variety of applications required in today's clinic. The device has a really broad functionality and allows you to perform the full range of ultrasound examinations from simple scanning of the abdominal cavity to complex diagnostics of the cardiovascular system.

Improved anatomical M-mode option. Allows you to change the shape of the envelope line. Based on the principle of quantitative assessment of myocardial synchrony and contractility.

This option allows you to improve the image when the needle is inserted into the patient's body. Indispensable for biopsy. Automatically highlights the area of ​​interest during invasive intervention depending on the angle of the needle insertion, suppresses noise during the procedure and brightly highlights the needle itself, which greatly facilitates the work of the doctor.

Echocardiography or EchoCG is a method used to study the heart. Aimed at its physical and morphological changes. The doctor sends an ultrasonic signal through the organ or tissue being examined, which changes the amplitude, period and frequency depending on the tissue. Then it is reflected from the wall of the organ or tissue, returned back and processed by the echocardiograph. In this case, the doctor receives a complete picture of the heart from 4 sides

Volumetric scanning in real time is the possibility of obtaining a three-dimensional image in real sections and slices. Achieved by prompt correction of scan angles and reduction of 2D scale noise. It is mainly used in obstetrics and gynecology. This option received a second name - prenatal painting - due to the fact that it allows parents to see their child before he is born. However, this function also has a clinical application - it allows you to study fetal anomalies, make more accurate diagnoses of diseases of a child in the womb by studying areas and tissues of interest from different angles.

In the modern world, ultrasound examinations are the most popular research methods. Ultrasound scanners can be combined with endoscopes, and slices from CT/MRI can be used in studies. Therefore, it is not surprising that ultrasound also supports the connection of an ECG to the system. Ultrasound scanners can be used instead of electrocardiographs, and using electrodes to conduct research in electrocardiography.

In the modern world, 3D ultrasound is becoming increasingly popular, however, as a rule, the 3D / 4D option or module, as well as the sensors that allow this study to be carried out, are expensive. Therefore, many devices use 3D free-hand reconstruction. Its principle is based on the fact that the doctor moves a conventional 2D sensor along the area of ​​interest, and the ultrasound machine forms a 3D image based on the received data.

Used on linear sensors. Since linear probes do not have a large scanning depth, they are usually used to study superficial organs (glands, muscles, joints, etc.). However, the virtual convex mode (trapezoidal mode) allows you to increase the scanning area due to the sector phased array located on the sides of the sensor. Thus, the scanning angle becomes equal to 15-20 degrees, and the beams are deflected so that the study area ceases to be linear and becomes trapezoidal.

Summation of data obtained from ultrasonic beams at different reception-transmission angles. This type of scanning increases the clarity of the contours and borders of tissues, and also allows you to get an image of tomographic quality. This is possible due to the fact that during multibeam scanning, the ultrasound beams intersect and capture all areas of the tissue. Also, this method is widely used due to the fact that it allows you to speed up the scanning process.

The blood vessel consists of three membranes - intima, media and adventitia. The main prerequisites for the appearance of atherosclerosis, cardiac ischemia, stroke or myocardial infarction can be traced in the diagnosis of the first two membranes. In this case, the most important is the determination of the thickness of the intima-media complex and its comparison with the characteristics accepted according to the standard. Automatic calculation of the thickness of the intima-media complex makes it possible to simplify the work of a doctor who previously had to make calculations manually, and also to avoid medical errors.

Reconstruction of the entire study surface, consisting of separate consecutive frames. This method allows you to scan immobile anatomical structures. The doctor passes the ultrasound probe over the entire area of ​​interest (ROI) at the same speed and receives a target.